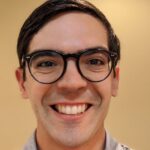 One of the best ways to improve your improvising skills is to emulate things great improvisers do. In today’s Quick Tip, we will be analyzing the brilliant Sonny Rollins’ solo from his timeless recording of “St. Thomas.” You will learn:

This is one of my all time favorite solos because it’s simple, incredibly musical, and super easy to learn from. Let’s dig in!

Before we start analyzing the solo, it’s important to go through the tune and learn the harmony. Every great solo is constructed around the harmony and form of the tune. Let’s take a look at the chord changes:

The form of this tune is a very simple A-B form. The A section (first eight bars) only has five chords, and the second four bars is an exact repeat of the first four.

Most of the changes of “St. Thomas” are diatonic (all the chords come from the same key), but pay attention to the A7 in measure two. This chord is a secondary dominant, which means it’s a dominant chord borrowed from a different key, in this case D minor. This is important because A7 contains the leading tone of D minor (C#). The leading tone helps guide the harmony and the ear to hear the next chord. They’re super important!

Play through the A section slowly and really pay attention to how that C# guides your ear to D minor. The same effect happens when you move from G7 to C Major (or any V7-1 harmonic motion). Now that we’ve got the changes down, let’s look at how Sonny Rollins uses motivic development in his solo.

A motif is a musical theme that persists throughout a song or solo. Check out the motif Sonny Rollins uses to start his solo:

This is so simple! There are a couple things I want you to notice about this motif: the first thing is the notes themselves, and the second is the rhythm. When analyzing a motif, it’s important to look at how the motif is constructed so we can understand how to develop it. The notes are simply the last two notes of the melody, G and C. Rhythmically, it’s an eighth note followed by a quarter note.

Look at measure two. All he does is repeat the motif, but changes C to C# (the 3rd of A7). Then, he changes the rhythm and the bottom note in measure three. Also in measure three, he adds a note to the original motif.

A Quick Note On Developing Motifs

The key to good motivic development is keeping the same idea interesting. Repetition is important, but so is variation! By adding an additional note here, he creates surprise because the listener isn’t expecting it. The same thing can be achieved by removing notes, changing the rhythm, or changing the direction of the idea (this motif is a descending idea. Make it ascending for variety!).

Now that he’s mostly kept to the same idea, in measure four he uses all three variations to finish the phrase. Cool!

In measure five, he varies the motif slightly, and as he moves through these four measures he gets a little busier but still sticks to the motif. He ends measure eight exactly the same way as measure four, tying the whole phrase together by repeating an idea.

Notice how he moves the rhythm around? This is one of the simple but brilliant ways you can take an idea and keep it interesting throughout a phrase. There are only four different notes in these eight measures, but it’s always surprising because of the way Sonny Rollins develops this idea!

Try taking Rollins’ motif and improvise yourself. See if you can find ways to keep this simple idea interesting while making it your own! Once you’re comfortable improvising yourself, let’s look at the second half of the solo.

Now that we’ve arrived at the B section, let’s look at the chords first:

Here we see a few different changes from the A section, especially in the last four measures of the tune. We have another secondary dominant here – C7/E. Play through these changes slowly and listen for how the Bb in that C7 chord guides the ear to hear FMaj7.

The last chord to mention is that F# diminished. This is simply a passing chord to get from FMaj7 to G7. If you want to dress up harmony of a song, adding a chromatic passing diminished chord between chords that are ascending is a great way to do that.

Let’s take a look at the first half of Sonny Rollins’ solo on the B section:

There’s a lot going on here! But it’s not as complicated as it looks. This entire line is constructed using arpeggios, outlining the chord changes as he moves through the phrase. To get the bebop sound, it’s important to make sure you’re playing chord tones or extensions on the downbeats of each measure. There are a few exceptions here on the dominant chords, however. He plays F natural on beat two over A7, and Bb on beat three – these are clearly not chord tones of A7! Sonny Rollins is altering this dominant chord to create a sound that leads into Dmin7. By adding the #5 (F) and b9 (Bb), he resolves this dissonance beautifully by landing on A (the 5th of Dmin7).

He continues this idea over G7, adding the b13 (Eb) and b9 (Ab) to keep that altered dominant sound. Beat four of this measure is an enclosure, which is a technique utilizing chromatic neighbors that encloses your target note. In this case, his target note is G, so he uses an enclosure of Ab-Gb-G. This is a great technique to use when you want to play bebop lines!

Let’s look at the last four measures of the first chorus:

Check it out – we’re back to using the original motif! All he’s doing here is changing the bottom note to fit the chords, and using the partial motif over the V chord. So simple, yet so musical! Let’s take a look at what he does during the second chorus now.

Let’s look at the first half of the second chorus:

Now, let’s look at the final eight measures of his solo:

He continues using arpeggios to outline the changes, but this time he incorporates some step-wise motion. To do this in your own solos, just play up or down the scale that fits the chord making sure to keep the chord tones and extensions on the downbeats. Pay attention to the enclosure he uses on beat four of measure 29!

Putting It All Together

Now that we’ve analyzed the entire solo, let’s play it in its entirety. What a great solo! There is so much here that you can practice and apply to your own playing. It’s amazing how much great musical material you can come up with from a simple idea.

If you want to dig in to some of the other concepts we went over, check out the following courses:

Thanks for learning, and see you in the next Quick Tip!

The ultimate 2-5-1 jazz scale exercise will unlock your potential as an improvisor and help overcome choppy, directionless improv lines.