Transform Your Piano Chords with the Shape Shifter

Sometimes as pianists, we find ourselves searching for new chord sounds, or a fresh approach to familiar chord sounds. In today’s Quick Tip, Jonny May shares his Shape Shifting technique to transform ordinary piano chords into intriguing piano soundscapes. This technique is perfect for playing situations that call for a more modern piano accompaniment texture. In today’s lesson, you’ll learn:

This lesson is perfect for intermediate level singer/songwriters and pianists who perform in contemporary ensembles.

The modern music scene is quite crowded. Therefore, finding an original sound is important to many bands and artists. For songwriters, one solution is to draw on less commonly used chord progressions. However, sometimes you may simply want to play familiar progressions in an innovative way. For example, maybe you want to play cover songs with your own unique sound. In this case, transforming your piano chords allows you to reach mainstream audiences while maintaining an original sound.

Pretty cool, huh? As you can hear, learning to transform your piano chords with the Shape Shifter technique allows you to play a familiar chord progression with a personal touch.

Now that you have an idea of what the Shape Shift technique sounds like, let’s learn how these modern piano chords are constructed. Today’s lesson sheet demonstrates how to transform any pop progression with Shape Shifter chords in 4 simple steps. The lesson sheet PDF and backing track are downloadable from the bottom of this page after logging in with your membership. You can also easily transpose this lesson to any key using our Smart Sheet Music.

How to Transform Piano Chords with the Shape Shifter

You can use to the Shape Shifter technique to transform any diatonic chord progression in 4 simple steps. Then, simply substitute these chords in your playing whenever you want to a more modern accompaniment sound.

The first step to transform your piano chords with the Shape Sifter technique is to play 2nd inversion triad shapes in your right hand. The following diagram illustrates the difference between root position, 1st inversion and 2nd inversion chord shapes. Notice that 2nd inversion triads are built up from the bottom using the formation 5th–Root–3rd.

Try playing the example below which contains all of the diatonic chords in F major with a 2nd inversion shape in the right hand.

If you need a refresher on how to play major and minor triads in inversions, be sure to check out the following Smartsheet resources:

In Step 2, we want to shift the 2nd voice (the alto) downward by a diatonic 3rd interval. When we say a “diatonic 3rd,” we mean that we are going to stay in the key signature of F major. Therefore, in the following example, the alto voice in the F chord moved down a minor 3rd, from F to D. By contrast, the alto voice in the Am chord moved down a major 3rd, from A to F.

You may have noticed that the note we shifted in each chord was the root. Therefore, by moving the root down a 3rd, we now have 4-note chords that sound very cool. The chord symbols in the example above reflect these new 4-note chords, which in some cases require slash chord notation.

What Makes These Chords Sound So Cool?

What makes these chords sound so cool? Well, each of these chords contain a cluster in the middle of the voicing. A cluster is two notes that are either a ½ step or a whole step apart. These clusters give Shape Shifter chords more interesting tone colors in comparison to ordinary triads.

There are two chords in Step 2 that contain a tritone. A tritone is a dissonant interval that spans three whole steps. For example, take a look at the second chord: Eø/G. This chord contains a tritone between the alto and soprano voices…the notes E→B♭. We find the same two notes in the seventh chord: C7/E. In C7/E, the tritone E→B♭ is found between the bass and tenor voices. As a result, the sound of the shape-shifted chords built on scale degrees 2 and 7 are a bit too jarring when compared to the others. In the next step, we’ll modify these two chords in particular to remove the tritone.

In the previous step, we identified that the shape-shifted chords built on scales degrees 2 and 7 were a bit out of character when compared with the others. Therefore, we will modify those two chords in this step.

Next, try repeating the chords from Step 2 in succession while substituting the modified chords above on scale degrees 2 and 7. Afterward, you are ready to move on to the next step.

Now that you have learned how transform your piano chords with the Shape Shifter technique, you are ready for the final step. Step 4 is to play common chord progressions entirely with shape-shifted chords.

Progression 1 is a 4→5→3→4 progression. The first example below shows this progression notated with traditional triads. The second example notates the same progression with shape-shifted chords.

Progression 2 contains twice as many chords and utilizes a sequence in which the chords move up a 3rd and then a down step. The last chord of the second measure breaks this sequence, but also sets up the progression to be repeated. For this reason, the demonstrations below come to rest on a final IV chord.

Nicely done. Now, it’s time for some real fun! Try playing Progression 2 along with the backing track that is included with today’s lesson. The backing track features more syncopated rhythms than shown above. To capture the correct feel, be sure to watch Jonny’s demonstration at the end of today’s Quick Tip lesson.

Congratulations, you’ve completed today’s lesson on how to Transform Your Piano Chords with the Shape Shifter. If you liked today’s lesson, then you’ll love the following related resources: 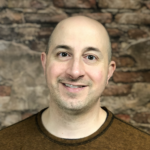 This Complete Guide on the Mixo-Blues Scale is your missing manual for professional blues piano soloing concepts and improvisation ideas.

You've heard of drop 2 chords, but what about lift 2 chords? If you want your playing to sound priceless, then invest in "The Gold Chord Voicing."

If you want to play blues piano with an authentic feel, don't neglect the left hand. Learn to master slow blues piano accompaniment in 3 steps.